Working principle of the Crosspunch method

Case studies on the crosspunch method

Loss of hair caused by androgenetic alopecia is a major threat to patients suffering from this disease. The article presents a 48-year-old caucasian patient suffering from androgenetic alopecia who was treated with Crosspunch method. This method is based on the angle variation (5 to 8 degree) of the micrograft transplants containing one to four hair follicle which are inserted into recipient site, to achieve a higher optical hair density. Patient and the therapist were fully satisfied with the result of this treatment.

For most people their physical appearance is the most important way to assess their aesthetic self-efficacy. This can be adversely affected by different factors. This impairment can go so far that the affected person seeks for medical advice because the subjective pressure of suffering becomes too great for them as a result of the optical change. One of these changes, which is often the cause of medical intervention, is the visible loss of the main hairline, also called alopecia.

At time of the treatment the patient was a 48-year-old Caucasian. The patient was married, of average height and height. He stated to be regularly physically active and to consume neither alcohol nor tabacco.

During the assessment and informed consent no contraindications for a surgical procedure could be identified.

The patient admitted to suffer from his increasingly thinned hair. At the same time, he felt so impaired in his aesthetic appearance that he considered a hair transplantation in order to eliminate the subjective limitation of the quality of life. 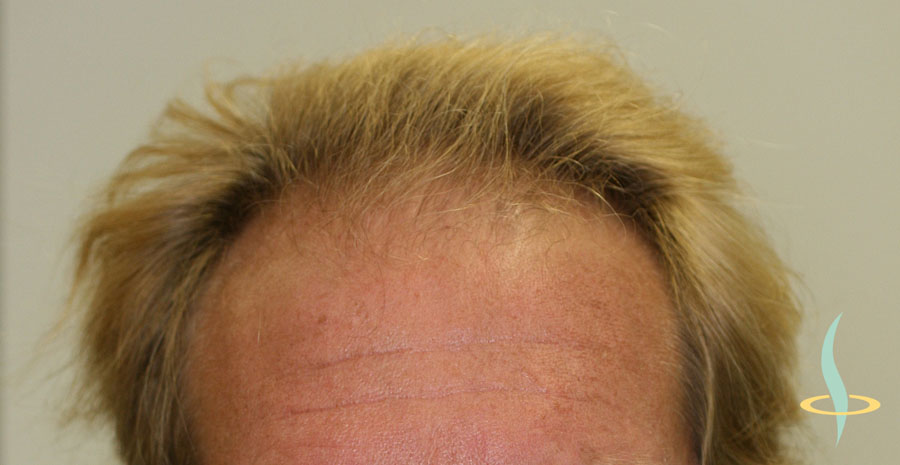 Figure 1 shows the frontal hairline of the patient. It can be seen that the hair gets gradually thinner from the forehead to the tonsure. The appearance of the skin surface was clinically inconspicuous. The patient had a sufficient donor site, so that all clinical criteria for a surgical intervention were met.
Patients frontal hairline before the intervention.

In accordance with diagnostic standards [1], the diagnosis of androgenetic alopecia in this patient was made without any further laboratory findings based on his clinical appearance.

During the diagnostic evaluation of the patient it was decided that the patient should be treated by use of the Crosspunch method.

Working principle of the Crosspunch method

In this method, the recipient site is pre-treated with a hollow drill (here 1 or 1.25 mm) at finely tuned angles. The micrografts are then inserted into the recipient site in mutually extending angles (approximately 5 to 8°). In this way, the later growth direction of the hair can be determined corresponding to an aesthetic point of view. The insertion in laterally displaced angles thus produces the impression of a higher hair volume. The insertion of the micrografts is carried out both left and right angled from the beginning (apart from the hairline). 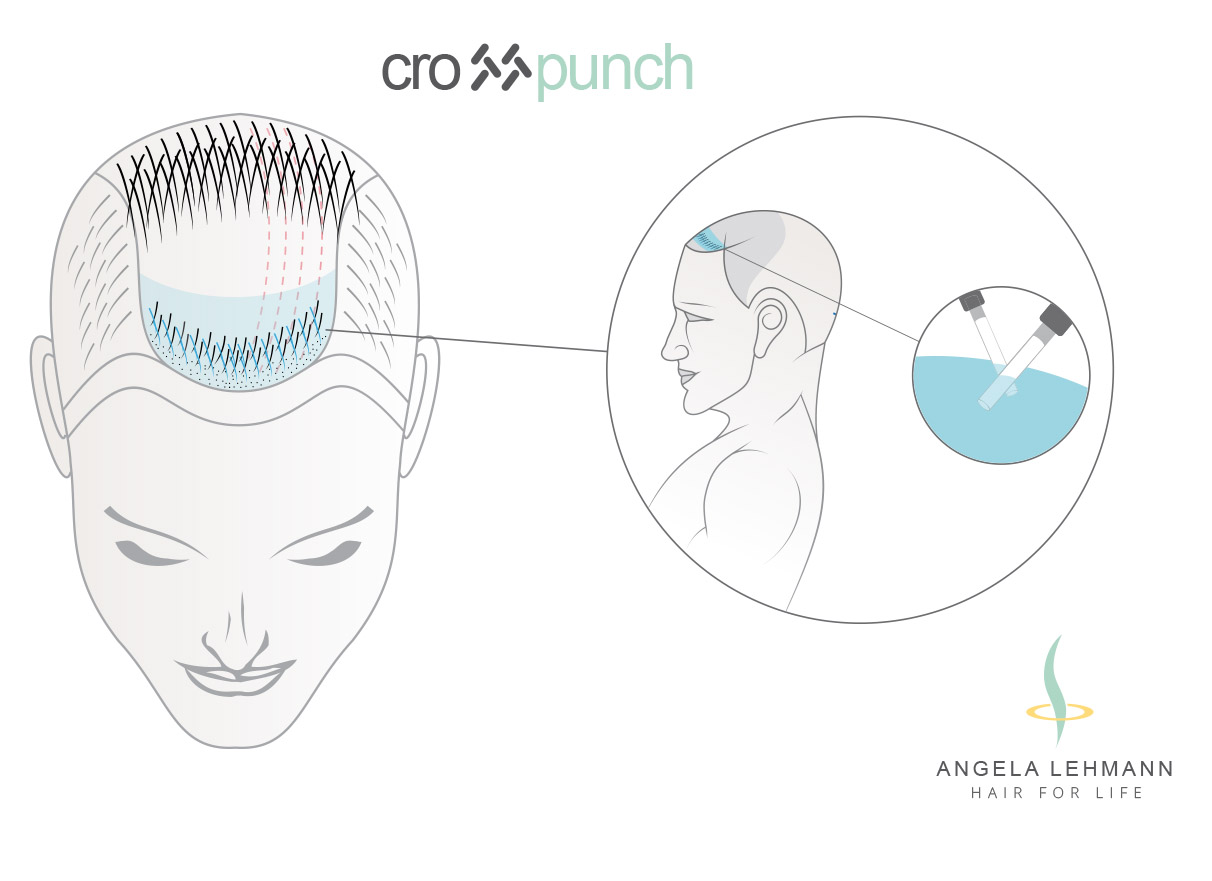 Figure 2 shows how the transplants were inserted into the recipient site which was prepared with angled bores.

Working principle of the Crosspunch method. Illustration showing the extraction of the standard-grafts of hairs. The micrografts are then inserted into the recipient site. 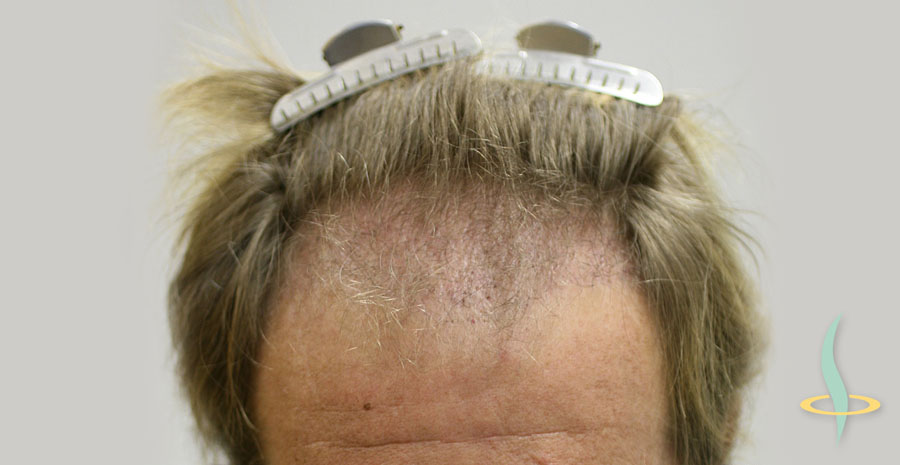 Finally, the treatment led to a much higher optical hair density than before the intervention.

In order to achieve a natural appearance even at the hairline, it should be noted that the hair growth direction corresponds to the natural direction while reconstruction of the hairline. Afterwards the Crosspunch method may be applied. Crosspunch can also be used in large scalp areas, such as from the hairline to the center of the head, from the center of the head to the cowlick as well as on the entire top head. Limitations of the Crosspunch method are arise when dealing with receding hairlines or small-scale recipient sites. Then an artificial or unnatural impression of the result can arise through crosspunch. This method is also not suitable for reconstruction of the eyebrows, beard and mustache reconstructions.

The fact that the insertion angle is of great importance for the treatment outcome was also examined by other authors. Thus, it is reported that the maximum number of grafts that can be implanted in 1 cm² recipient site can be calculated by the formula 33 * cos α, where α is the angle enclosed by the growth direction of the hair and the scalp. This results in the fact that the maximum number of transplantable grafts depends on the graft size, the angle α and the distance between the grafts [3].

Miao et al. indicate that these number of transplantable grafts and their density also depend on the ethnicity of the patient. In this respect, four factors are crucial for the aesthetic outcome, including, in particular, the donor site, growth direction or transplantation angle, the graft density, and its later survival rate. For East Asians, they recommend 35 to 40 grafts per square centimeter in the recipient site, which corresponds to a graft size of about two follicles in estimating 75 naturally occurring follicles per square centimeter donor site. These data are consistent with the data presented here when the ethnicity is taken into account. Deviating from the experience presented here, Miao et al. however state, that the grafts should always be inserted with respect to the natural growth direction [4]. This recommendation may be justified by the fact that East Asians are more likely to have very smooth and thick hair, which would lead to an aesthetically worse result using an offset angle of 5 to 8°.

During further literature research, however, no data could be found that indicate concrete angles of insertion for the micrografts. Thus, for example, Umar states that natural hairiness can vary greatly between 15 and 60 follicles per square centimeter, depending on the localization, consistent with the experience reported here and the findings of Miao et al. Further, Umar argues that the implants should be used at an appropriate angle that is consistent with the rest of the aethetic appearence. However, no concrete information is given how this angle should be determined [5].

Based on the case presented here and the our experience so far, it can be assumed that the Crosspunch method is particularly suitable if an optically high hair volume is to be achieved with only a few transplants. Based on this, the micrografts should be transplanted at an angle of 5 to 8° to each other after reconstruction of the hairline.

A. Lehmann declares no conflict of interest.