What is androgenetic alopecia?

What does transplantation of self-grown hair mean?

What may somebody expect from hair transplantation in a mathematically realistic way?

Why do we use another technique?

Do you have any further questions?

This can be achieved with a hair transplantation

Dear Sir or Madam,
With this article I would like to briefly introduce the latest advances and modern techniques of hair transplantation. This, I hope, I have done as intelligible as possible. Besides aesthetic aspects of the used techniques, I would like you to learn more about the possibilities and limitations of hair transplantation. It is also my wish to explain to you, why I prefer one certain technique to others when treating patients with alopecia. For this reason, this article should serve as preparation for an informative conversation in my medical practice, if you are interested in further information concerning this topic.

Hair loss, medically also known as alopecia, is a very common phenomenon which can affect nearly everyone. The causes of alopecia are very diverse. There are several special forms such as for example druginduced or ischemic (because of lowered blood supply) alopecia. The most common form is androgenetic alopecia (Füessl 2015; Blume-Peytavi & Vogt 2014).
Independent of what caused alopecia, this phenomenon is associated with a high psychological strain, especially in women. For many affected by it, it also means a lowered quality of life. Patients have the impression of losing social appreciation and are ashamed of their visual nature (Weiss 2015). Hence, people suffering from alopecia perceive it as an aesthetic defect, which makes them seek adequate therapy. Due to the high psychological strain, patients have high and partially unrealistic expectations of what hair transplantation can achieve to improve their situation. Nevertheless, the transplantation of selfgrown hair is, for many patients, the method of choice.

What is androgenetic alopecia?

Androgenetic alopecia, also known as heritable loss of hair, is the most common type of hair loss. This type of alopecia is caused by hypersensitivity against the hormone dihydrotestosterone (DHT), which is synthesized by the enzyme 5-alpha-reductase. DHT is an intermediate deriving from testosterone (a male sexual hormone). DHT shortens the vegetative phase of hair growth and atrophies the hair follicle. In most cases, it does not affect the follicles on the sides and the back of the head. For this reason, these follicles are most suitable for transplantation.

What does transplantation of self-grown hair mean?

Actually, the term hair transplantation is not suitable to describe the actual techniques used, because not the hair itself is transplanted but hair follicles. In an amateurish way, follicles can be explained as the seeds or roots of the hair. This distinction becomes particularly important in aesthetic questions relating to hair thickness and density, because the thickness and density of hair follicles vary depending on their location on the head surface (Paukstadt 2012). Independent of this, the term hair transplantation will be used throughout this article.
Self-grown hair transplantation is a method to transfer a person’s hair follicles from one place (donor surface) to another one (acceptor surface) using different techniques, which will be explained in the following. With this method, locations, which are already affected by alopecia, can be aesthetically restored. Hair transplantation is done ambulatory and under local anaesthetics.
Patients willing to do a self-grown hair transplantation should be aware that this is a medical intrusion and, hence, a strain to their bodies. For this reason, it is considered a minimal invasive intervention. Furthermore, all methods of hair transplantation cause scars, but their shape and look may depend on the method used. Because hair transplantation is a minimal invasive intervention, only the transfer of a limited number of follicles per session is possible. In this context, the patients should be furthermore aware that aesthetic goals of the intervention are not as important as maintaining their health. This means, for example, that it is not realistic to transfer 12,000 or more follicles per session. Accordingly, to achieve aesthetically desirable results, in most cases more than one session is needed.

What may somebody expect from hair transplantation in a mathematically realistic way?

As was already mentioned previously, most patients expect aesthetically desirable results. This results in some patients having excessive and unrealistic expectations from hair transplantation. Hence, in the following it will be explained how possibilities and limitations of self-grown hair transplantation can be calculated.
An ordinary European, who is not affected by hair loss, has a hairy head surface of about 600 square centimetres. On this surface, there exist approximately 120,000 healthy follicles. This value may vary depending on the ethnicity of the patient. The following chart illustrates this fact. 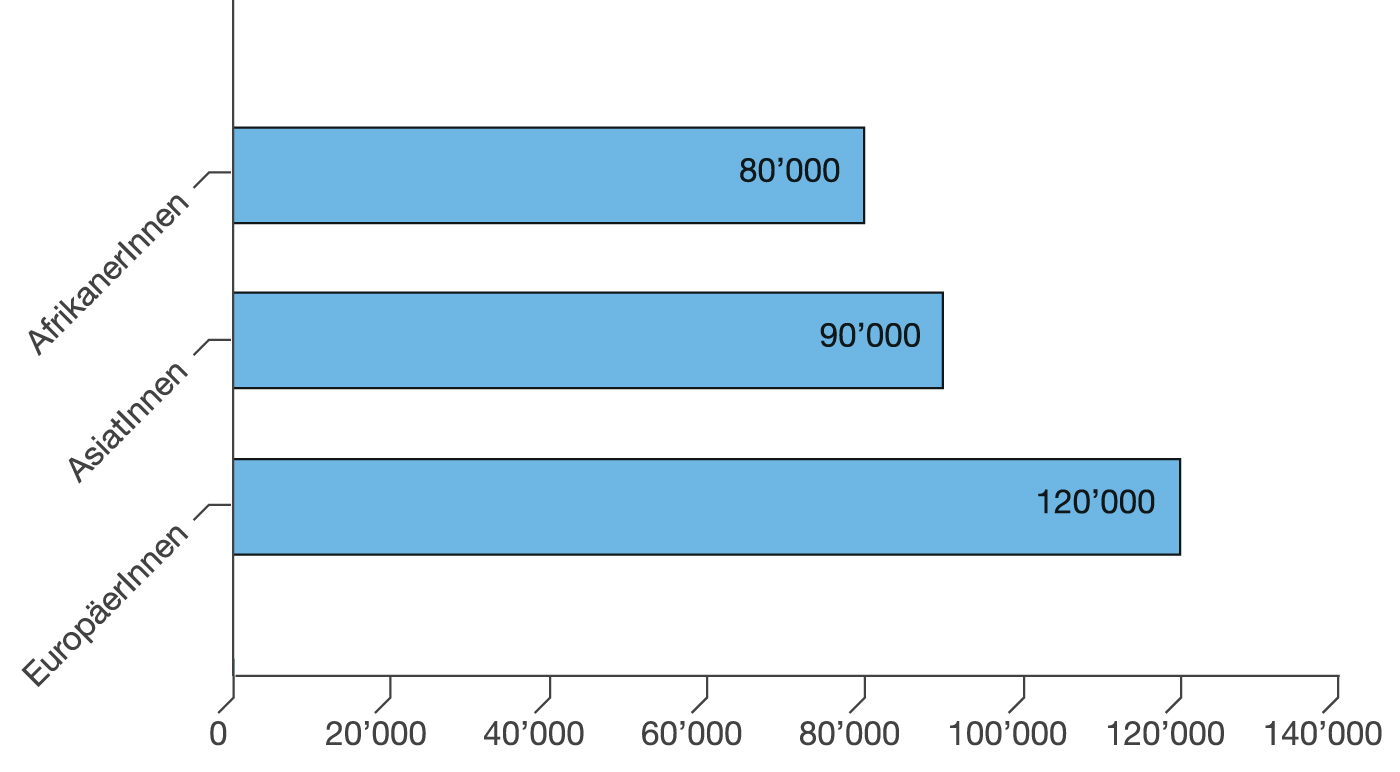 Figure 1: Number of follicles depending on ethnicity.

Distinctive alopecia causes the loss of the follicles from forehead to cowlick, which corresponds to a length of approximately 20 centimetres and a width of 10 centimetres with about 65,000 follicles remaining on the donor surface for potential transplantation; but not all of them are suitable for this method. For example, follicles from the temple or hairline should not be transferred due to a lower density and a more filigree structure. Consequently, we only transfer follicles located about 4 centimetres above the left ear conch on the back of the head to right ear conch. This is in particular important for patients younger than 24, because the future progress of the alopecia is difficult to estimate. Hence, there would be a risk of transferring follicles, which may later also be affected by androgenetic alopecia. Considering these average values, a head circumference of 60 centimetres and an optimal donor surface of approximately 90 standard grafts with a diameter of 5 millimetres could be extracted by S&P-Extraction (see chapter 5) per session. This corresponds to a hairy head surface of 17 to 18 square centimetres. Because 1 square centimetre contains about 200 healthy follicles, this may result in the transfer of 3,400 to 3,600 hair follicles per session. Assuming an optimal donor surface, this procedure may be repeated up to four times in each patient.

All techniques of self-grown hair transplantation are based on the extraction of folliclecontaining tissue from the side and the back of the head and its transfer to another location. The main difference between the existing techniques lies in the way of extraction. This difference is very important, because the shape of the remaining scar may be influenced by the choice of technique. Hence, the aim in every case is to make the scar as inconspicuous as possible.
Generally, every technique is based on the extraction of grafts or FUEs. These are follicle-containing pieces of tissue of a certain diameter. By variation of the diameter, it is possible to generate fine implants, which are later reimplanted. The following figure illustrates the grafts. 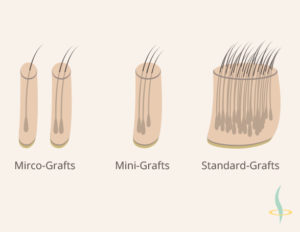 The method called FUT refers to the extraction of a skin stripe from the donor surface by use of a scalpel. This is in most cases associated with significant disadvantages for patients’ aesthetic expectations. The biggest disadvantage is that it leaves an undesired linear scar, which is dominant in appearance.
The most commonly used technique follicular unit extraction (FUE) is the so-called follicular unit extraction (FUE). This method has the advantage of more inconspicuous scars. First, the complete donor area is shaved, which constitutes an aesthetic disturbance for most patients. After this, the follicular units (FUs, another term for grafts), varying in size, are extracted with a hollow drill or a needle. As already mentioned, the shape of the emerging scar may be influenced by the size of the drill or needle. The minimal diameter should be 1 millimetre. This is especially important in the case of thicker hairs, considering that an ordinary hair has a thickness of 0.05 to 0.07 millimetres and an even larger follicle itself. Considering the elliptic shape of a follicle in the case of curly hair, there is an additional risk of injury by using FUE. As opposed to S&P-Extraction, the extraction of the follicles is more difficult, when using FUE. Especially when a small hollow drill is used, extraction of the grafts is only possible with a pair of tweezers. This leads to the further loss of follicles. Generally, the smaller the hollow drill diameter, the finer the resulting implant, which may be regarded an advantage. But it is also true that the smaller the hollow drill diameter, the higher the risk of injuring the follicles. Assuming a good healing process, many small, round scars will remain after the extraction. These, however, will hardly be visible once covered by the hair growth later on. Per square centimetre donor surface not more than 10 to 15 FUs should be extracted, as otherwise this may result in visible scars. The most important disadvantage of the FUE is the high loss of follicles during the extraction. This may affect 20 to 30 percent of the extracted and re-implanted follicles. Hence, it is very difficult to forecast the later result.
The re-implantation is realized through slit incision whereby the implants are inserted with a pair of tweezers into the smallest possible slits on the acceptor surface (called slit and place).

Why do we use another technique?

Due to the listed disadvantages we use another technique for hair transplantation, the so-called S&P-Extraction. This method unites the advantages of an inconspicuous scar and a small loss of follicles during the extraction.
This method of choice begins with the extraction of standard grafts with a diameter of 5 millimetres. The difference between a standard graft and a FU-transplant is that the former one contains more than one FU. After the extraction, the standard grafts are split resulting in up to 1,400 fine implants per session containing up to 3,600 follicles. Furthermore, the drillings are placed very closed to each other, which leads to an even more inconspicuous scar. The later graft split solves the problem with the lower drill diameter and leads to a lowered loss of follicles during the extraction. At the same time, a more inconspicuous scar can be achieved. This would not be possible using FUT (extraction of a skin stripe). In this way, we combine the advantages of minimal follicle loss and inconspicuous scars. The following figure illustrates the S&P-technique. 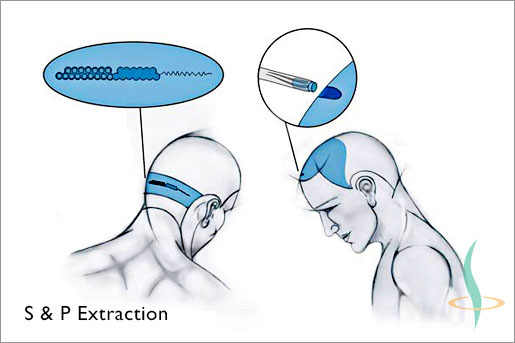 The acceptor surface is prepared with boreholes ranging from 1 to 1.25 millimetres in diameter. The prepared transplants are called micro grafts (containing 1 to 4 follicles) or FUs. The definition of a FU is met, when a graft contains 2 to 4 hair follicles located very close to each other. The micro grafts are inserted in the boreholes with a pair of tweezers. As opposed to slits, the boreholes have the advantage that the later growth direction of the hair can be influenced. This way, it is possible to avoid the so-called cluster effect, again leading to aesthetic advantages.

Do you have any further questions?

I hope that I was able to answer some of your question concerning self-grown hair transplantation. If you have any further questions, do not hesitate to make an appointment for an informative consultation in my medical practice; I would be pleased to welcome you.