The biology of human hair

What is the function of hair?

How does hair grow?

What is hair and how does it grow?

the regular visit of the hairdresser or a hairstylist has become an integral part of everyday life for many people today. The offered services go far beyond the simple cutting of the hair and include, for example, the dyeing of the hair or a perm. Then, substances are used which ensure that the used dyes remain permanently in the hair or which are capable of changing the hair texture from curly to smooth or in the opposite direction. However, the fewest customers will be aware of the chemicals used to perform such treatments.

Even if the hairdressers emphasize the fact that today’s colorants are “gentle”, such treatments are always associated with the use of partial aggressive and potentially harmful chemicals on the hair. For example, to change the hair color permanently, the hair structure must be “opened”. But what does this mean specifically for the hair and the hairdresser’s customers?

In my new article, I would like to give you some answers to these questions. For this purpose, I first explain what hair is and what biological function it fulfills. Afterwards, I briefly sketch the biochemical structure of the hair to explain how treatments with dyes work and what exactly happens with the hair while straightening it or doing a perm. Finally, I will discuss the importance of such a treatment for hair structure and stability, and what you should pay attention to at the next hairdresser visit. 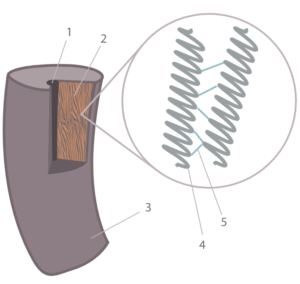 Each hair of the body is composed of three layers. The inside of the hair is built up from the so-called core cells. This part is also called medulla. The so-called cortex is found outside. This layer accounts for about 80 percent of the hair substance. It consists chiefly of keratins, a certain kind of proteins which form the basic substance of hair and nails. This hair layer is also mainly affected by hairdressing treatments. The hair cortex also contains the hair pigment. These are biological dyes which give the hair its natural color. This can vary in humans from black to white over different browns and reds. At the same time, the structure of the hair cortex determines the firmness and elasticity of the hair. Around the cortex is the cuticle or scaly layer. This consists of dead keratinized skin cells, which are oriented towards the tip of the hair like a pine cone. The appearance of the cuticle is the most important reference point for the health condition of the hair: In healthy hair, the scales are tightly entangled and interlock seamlessly. This ensures that the hair shines and is lively. If, on the other hand, the structure of the cuticle is altered as a result of a changed water content or a changed pH value, this may cause the flake layer to open. As a result of the fact that the individual scales no longer interfere perfectly, the light is no longer reflected as well. As a result, the hair shines less and it looks dull and lifeless. 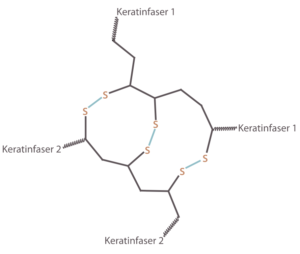 The keratins, from which the hair is mainly built, also decisively determine its structure. The chemical structure of these proteins determines whether the hair is smooth or whether it is curly. In addition to the question whether the hair grows from an elliptical or a straight hair follicle, this property of the hair texture is mainly determined by so-called disulfide bridges.
These are chemical structures formed by the amino acids that make up the keratins. A disulfide bridge is always formed by two sulfur atoms of the amino acids, which are more or less far apart. It is particularly important for the hairdresser whether the disulfide bridges are present in an oxidized (-S-S-) or a reduced state (-SH), since this determines whether a hair is curly or smooth. The following figure illustrates this.

What is the function of hair?

From a biological point of view, the hair fulfills a variety of functions. However, only heat regulation and light protection are relevant to humans. Other functions of the hair, such as the camouflage protection achieved by the hair pigment, play a role in the animal kingdom. On the other hand, the appearance and color of the hair in human culture is important, above all, for its aesthetic and fashionable function. Thus, the appearance of the hair in the different cultures has a predominantly sociocultural significance and, for example, makes it possible to assign a person to a particular social class or caste. For example, the punk culture can be cited here, whose members are always adorned with unusual hairstyles and haircolours. In general it can be said that the appearance of the hair is one of the oldest means to express the social origin of a person.

It is also important that each individual hair is surrounded by a small muscle at its root. When this muscle contracts, this leads to the erection of the hair and thus to the characteristic goose bumps. The activation of the hair muscle is performed by a nerve fiber. The hair shaft itself, as the part of a hair, which is shortened, for example, by the hairdresser, is not traversed by nerves. Otherwise haircutting would also be a very painful affair.

How does hair grow?

The development of human hair begins before birth. The hair follicles, from which the later hairs grow, are already present in the mother’s body, each man having about as many hair follicles as a chimpanzee. In contrast to these closely related mammals, however, hair does not grow from every hair follicle.

In a biological sense, lanugo and terminal hair can be distinguished. The lanugo can be divided into fluffy and woolen hair. The fluffy hair is formed from the fourth fetal month on. It is short, thin and not pigmented. From about the sixth month on, the fluffy hair is replaced by woolen hair. This is somewhat coarser and slightly colored. In females, the woolen hair is maintained for about two thirds of the body surface for the rest of the life, while in males it is largely replaced by sex hormones with terminal hair. These is thicker and pigmented. At the same time, terminal hair can be differentiated according to the body region. In this way the different appearance of head hair, eyebrows or armpits come about.

Hair growth is cyclical during a major part of life. Three sections can be distinguished: the anagen, the catagen and the telogen phase. In the anagen phase, the hair root is newly formed and the production of a hair begins. This phase takes about two to six years for the human head hair. This phase is characterized by constant growth of the hair, with growth on the head of about one centimeter per month. In the subsequent catagen phase the cell matrix breaks up cell division. This leads to a constriction of the hair follicle and to its shortening. At the same time, the connection of hair shaft to hair papilla is separated, which leads to the precipitation of the hair. In humans, about one percent of all head hair is in this growth phase. In the last phase of the cycle, the telogen phase, the follicle regenerates and the cell division begins anew, which also involves a renewed hair production. This phase of the hair cycle takes about two to four months and about 18 percent of the hair is in this phase.

The actual growth phase of individual hair can be determined by a so-called trichogram. In doing so, some hairs are pulled out at the forehead and the hair root is microscopically examined. In this way, for example, it is possible to clarify certain physiological conditions such as alopecia.